The world’s most famous Tyrannosaurus rex specimens ever, SUE and STAN, were the subjects of a first-of-its-kind copyright infringement lawsuit. 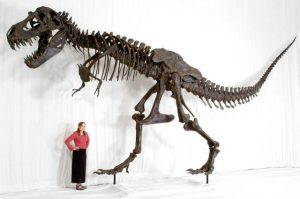 After 65 million years, the world-famous Tyrannosaurus Rex finally got its day in court in November 2010 according to Peter Larson, President of Black Hills Institute of Geological Research, Inc. In an $8.2 million dollar lawsuit filed in the Federal District Court of Montana, the South Dakota-based Black Hills Institute of Geological Research Inc., alleged that a competitor, Fort Peck Paleontology Inc., wrongfully pirated and reproduced copyrighted portions of some of the most famous T. rex specimens in the world.

Black Hills Institute was represented by Santangelo Law Offices P.C., a Fort Collins, Colorado-based law firm that litigates copyright and other intellectual property matters, and the local law firm Crist, Krogh & Nord LLC, in Billings Montana. “You can’t pirate a T. rex copyright and not expect to get bitten,” quipped Mr. Santangelo, the lead attorney on the case. “We protect our clients from copycats – and the fact that these are the most famous T. rex specimens in history makes preventing wrongdoing absolutely critical,” explained Mr. Santangelo. “We’re happy we were able to have an amicable settlement with them.”

Black Hills Institute is one of the world’s leading institutes for the preparation, creation, sculpting, and casting of museum quality fossilized dinosaur creations and exhibits. Their paleontologists were the creative force behind the top two most famous T. rex specimens in the world: SUE (FMNH PR20981) and STAN (BHI 3033). SUE is the most complete and well-preserved T. rex ever discovered, and is the headliner display at the Chicago Field Museum. STAN is the second most complete T. rex ever discovered and is displayed at the Black Hills Institute’s Hill City, South Dakota museum.

As Larson explained, the large T. rex specimens that are created by the Black Hills Institute for museums and private collections represent “literally tens of thousands of hours of work by scientists and artists, which can cost millions of dollars to create.” Larson explains that “finding a T. rex specimen in the ground is only the start. Each fossil must be individually interpreted and reconstructed from the pieces that are found. Missing and damaged bones must be hand-crafted and cast by our experts before we can assemble a full T. rex specimen like people see in museums.”

Around 1997, incomplete portions of a T. rex skeleton were discovered near Fort Peck, Montana. These skeletal remains were later nicknamed “Peck’s Rex” and taken to the Montana-based Fort Peck Paleontology Inc., for additional study. Having excavated and prepared several of the most significant T. rex skeletons in the world, Black Hills Institute loaned several copyrighted T. rex bone specimens from STAN and SUE to Fort Peck Paleontology to help assist in their research efforts.

As outlined in the federal lawsuit, Fort Peck Paleontology unlawfully retained possession of these bone specimens and proceeded to make unauthorized copies of the STAN and SUE copyrights. These unauthorized copies were then incorporated into the “Peck’s Rex” skeleton currently at the Museum of the Rockies in Bozeman, Montana.

Says Larson,“Fort Peck can’t argue they did not realize our dinosaur specimens were copyrighted works; we told them. We tried to get them to stop, but they just ignored us. Like any other sculpture, these are individual hand-crafted works of art.” The Copyright Office agreed. It granted the Black Hills Institute official copyrights for STAN T. rex and SUE T. rex.

When asked about Fort Peck Paleontology’s motivation for doing this, Mr. Larson explained that there is a strong financial incentive to copy such works. “These specimens are extremely difficult to create and assemble into a full T. rex model. If you can just take someone else’s work and copy them that will save you an enormous amount of time and money.” Larson further explained that original T. rex specimens “have sold for millions, and reproductions can fetch hundreds of thousands of dollars a piece, so clearly there can be a strong financial incentive to cut corners.” The company’s website lists the full-skeleton replica of Stan for $100,000; the skull alone for $9,500.

“Tyrannosaurus rex is my passion,” explained Larson. “I am very proud of the scientific and artistic contributions we have made over the years. The work we do at Black Hills Institute is truly a mix of scientific and artistic expression resulting in one-of-a-kind works such as STAN and SUE. It really is a labor of love and we simply cannot allow others to claim our work as their own. We have tried unsuccessfully for years to get Fort Peck Paleontology to return our property and acknowledge their copying of our work. In the end, I have to protect the integrity of the Institute, my employees, and our work,” said Larson.

Black Hills Institute asserted damages of $8.2 million dollars at the hands of Fort Peck Paleontology and others. In addition to copyright infringement, the lawsuit claimed unfair competition, as well as misappropriation and conversion of Black Hills Institutes’ intellectual and personal property. Black Hills Institute of Geological Research, Inc. v. Fort Peck Paleontology, Inc. et al, CV-10-76-GF-SEH (D. Montana, Great Falls Division). Defendants argued that castings of dinosaur fossils constitute exact replicas of objects found in nature and as such are not subject to copyright. But, Larson said the fossilized bones that his company finds bear no resemblance to the replicas they create after cleaning, restoring, glueing, then making a cast.

Note: The original infringing “Peck’s Rex” skeleton is currently with the Museum of the Rockies in Bozeman, Montana, while “STAN” is on display at The Museum at Black Hills Institute in Hill City, South Dakota. The T. rex “SUE” is currently on exhibit at the Chicago Museum of Natural History.

Follow Us On
Fort Collins, CO
Denver, CO
San Diego, CA
Disclaimer The information provided on this website should not be deemed as constituting legal advice or as creating an attorney-client relationship with website visitors. The clients’ outcomes noted on this site are for illustrative purposes only and are not guarantees on the outcome of your potential intellectual property rights. Thank you for visiting our website. ©2018 Santangelo Law Offices P.C. All rights reserved. Website by Sage Marketing Group | Privacy Policy | Terms of Use 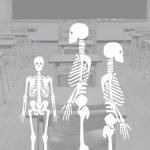