U.S. DISTRICT COURT, COLORADO, October 28, 2015. After deliberating for only two and a half hours, a federal jury unanimously ruled in favor of R/X Automation Solutions in a patent infringement case brought in the U.S. District Court of Colorado by Knapp Logistics, Inc., a subsidiary of KNAPP AG, headquartered in Hart bei Graz, Austria. The verdict was a sweeping victory for RXAS, as the jury found that none of RXAS’ line of S4 Script Count pill counters infringed Knapp’s patent. The jury also found that the patent Knapp asserted against RXAS was invalid. 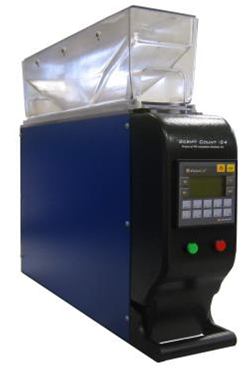 This unanimous verdict is the culmination of nearly two years of litigation between the parties. Knapp sued RXAS in December 2013 for allegedly infringing Knapp’s patent related to automated pill counters. RXAS countered that none of its S4 Script Count pill counters infringed Knapp’s patent and that Knapp should never have been granted the patent in the first place.

Luke Santangelo of Santangelo Law Offices in Fort Collins, which represented RXAS, noted the significance of this win: “This case is one of only a handful of cases nationwide in the last decade to invalidate a patent for a violation of the on-sale bar. Critical to our success was having a client with a strong conviction to stand up for what was right. We couldn’t be happier with the result, because it shows that the system works and can protect the good guys – even against a well-funded international corporation.”

“We are thrilled with the efforts of the entire team at Santangelo Law Offices,” said R/X Automation Solution’s President, Tim Chambers, about the unanimous jury verdict. “It’s been a long haul, and it’s not a fight we chose, but it’s great to see that the system works. We knew we didn’t infringe from the very beginning, and had faith that a jury would agree. After watching our litigation team at Santangelo Law Offices rack up win after win, we felt confident taking this case to the jury. It was important to have a team that was willing to stand up for our company, our employees and most importantly our customers.”

This victory builds off Santangelo Law Offices’ prior summary judgment victory as to Knapp’s claim of patent infringement of one of RXAS’ new S4 Script Count product lines. Luke Santangelo, reflecting on what this victory means for RXAS, stated: “Juries are smart, and when presented with the facts are able to see through corporate games. This jury sent a clear signal to the pill dispensing industry of the concocted nature of Knapp’s claims, and that RXAS’ products never infringed.”

Follow Us On
Fort Collins, CO
Denver, CO
San Diego, CA
Disclaimer The information provided on this website should not be deemed as constituting legal advice or as creating an attorney-client relationship with website visitors. The clients’ outcomes noted on this site are for illustrative purposes only and are not guarantees on the outcome of your potential intellectual property rights. Thank you for visiting our website. ©2018 Santangelo Law Offices P.C. All rights reserved. Website by Sage Marketing Group | Privacy Policy | Cookie Policy | Terms of Use

We use cookies to improve user experience by remembering your preferences and repeat visits. By clicking “Accept”, you consent to the use of ALL the cookies. You may manage your preferences through “Cookie Settings” to provide a controlled consent.
Cookie settingsACCEPT
Manage consent

This website uses cookies to improve your experience while you navigate through the website. Out of these cookies, the cookies that are categorized as necessary are stored on your browser as they are essential for the working of basic functionalities of the website. We also use third-party cookies that help us analyze and understand how you use this website. These cookies will be stored in your browser only with your consent. You also have the option to opt-out of these cookies. But opting out of some of these cookies may have an effect on your browsing experience.
Necessary Always Enabled
Necessary cookies are absolutely essential for the website to function properly. These cookies ensure basic functionalities and security features of the website, anonymously.
Functional
Functional cookies help to perform certain functionalities like sharing the content of the website on social media platforms, collect feedbacks, and other third-party features.
Performance
Performance cookies are used to understand and analyze the key performance indexes of the website which helps in delivering a better user experience for the visitors.
Analytics
Analytical cookies are used to understand how visitors interact with the website. These cookies help provide information on metrics the number of visitors, bounce rate, traffic source, etc.
Advertisement
Advertisement cookies are used to provide visitors with relevant ads and marketing campaigns. These cookies track visitors across websites and collect information to provide customized ads.
Others
Other uncategorized cookies are those that are being analyzed and have not been classified into a category as yet.
Save & Accept